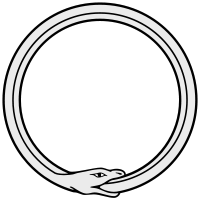 In his blog on technology for the writer’s group The Loft, my friend Don reinterprets the Ouroboros, conventional “he who eats the tail” as “that which creates itself by speaking itself.”

I know I’m supposed to think the Ouroboros paradoxical. The snake who constantly consumes itself, but is never consumed. But that is not how I see it. I see the circle grow ever tighter until it becomes a point, and then disappears.

However, if the snake is speaking itself into existence, the paradox seems unavoidable. I see it happening, so I must believe it, but it seems impossible because how did it start?

Don writes a bit of PHP code that “eats” a string of characters and regurgitates it in reverse order as a symbolic representation of the transformation from Ouroboros “one who eats his tail” to Soroboruo “that which creates itself by speaking itself”. Comments poetically explain the code’s function, as if holding the code up to a mirror, reflecting the analogy.

I think a better programing analogy might be to the concept of recursion. “Ordinary” functions F(x) take a value x and transform it into a new number, for example F(x)=x2+1. In code, this might look like function fnF(x){return x^2+1;}. This is easy to understand. Hand the function an “x” and the function will return a “y” equal to x2+1.

This happens to be the definition of a Fibonacci series. From n=-5 to n=5 one such series is … 5, -3, 2, -1, 1, 0, 1, 1, 2, 3, 5 … . The definition of the function explains from where the next number comes, but from where did the series come? No matter how far back one goes, there are always two earlier elements that needed to be calculated from yet earlier elements. I see it so I must believe it, but it seems impossible because how did it start?

Of course, historically the Fibonacci series was created by assigning F1=1 and F2=1 and calculating forward. Later it was extended to negative “n”. This is rather like freezing the Ouroboros in time, which is exactly what the drawing at the top of this essay does. It is only in our minds that we imagine what the Ouroboros must have looked like before, and before that, and before that, creating the symbolism and the paradox. But didn’t the Fibonacci recursion relationship and the series itself always exist, independent of time, from -∞ to +∞, without us having started it?

If the Ouroboros is “speaking itself into existence”, it is more than recursive, it is  self–referential, i.e. talking about itself. Self-referential statements are even more difficult to deal with. The most famous such statement was made by the Cretan Epimenides, as quoted by the Apostle Paul: “Cretans are always liars” (Titus 1:12).

Is that statement true or is it false?

Self-referential statements are so problematic that one is tempted to ban them from logic. But isn’t the ability to examine one’s self, talk about one’s self and modify one’s self the very definition of possessing consciousness?

This is the basis for Douglas Hofstadter’s assertion that self-referential algorithms, or “strange loops” as he calls them, are critical to artificial and natural intelligence.

In his blog, Don call attention to an analogy between his reinterpretation of the Ouroboros and  the Gospel of John

When we read this in conjunction with Genesis

then God said, “Let there be light”; and there was light

we see God simultaneously speaking the words that bring the universe into existence and  being “the Word”.

In the original Greek, what was written was λόγος (logos), which means not only “word” but “an expectation” and “reason”. I particularly like the thought of the universe existing as “an expectation”, full of potentialities, where we create it as we go by the choices we make.

Emanuel Swedenborg saw the human as a microcosm of the universe and the creation story of Genesis as a symbolic description for individual human development. While he proposed detailed correspondences for each of the seven days, they can be generalized into three steps (1) recognizing the need to improve [Repentance], (2) acting “as if” you were improved, i.e., practicing [Reformation], and finally, incorporating the “new you” into your inner nature [Regeneration]. In a real sense, we are “speaking our new self into existence”. While Swedenborg has a particular way of expressing these concepts, you see similar principles espoused in practically every religion and every secular “self-help” group.

Doug Stinson enjoys pondering unexpected connections and sharing his discoveries. He is also a physicist, a photographer, a new product realization executive, and a student of history, the environment and religion. You can learn about his other creative ventures at http://www.douglasgstinson.com
View all posts by dougstinson →
This entry was posted in Mathematics, Religion, Science and tagged Creation, Epimenides, Fibonacci, fibonacci series, Hofstadter, Ouroboros, recursion, recursive function, Regeneration, religion, science, self-reference, self-referential, strange loops, Swedenborg, The Loft, theology. Bookmark the permalink.

What are your thoughts? Cancel reply